If you're in the Mid-Atlantic, then you probably know about all of the storms and tornadoes that hit today. Serious weather, seriously. It was no joke- and the footage of all of the damage around the state just proves that.

Well, there I was eating dinner and catching up on my TV show On Demand. I have to say, and I'm not a huge fan of Verizon, that I was really impressed with FiOS today. While I was watching video on demand FiOS automatically cut off my show and switched it to a live broadcast station due to the tornado warning for my area. It didn't turn my show back on, but I was impressed that it tuned me into the news so that I could be informed. Way to go FiOS.

Yeah, I went and got the Go Crib. I had it fully dissembled from washing it, so not only did I have to blow it up, but I also had to reassemble the whole thing. (It comes apart to wash, but stores intact.) Then I put it in an interior space on the lower level and moved sleeping Billy to it with a bunch of his luvies.

I also gathered the camping lantern and telephone and locked Buddy down on the lower level with us.

But, look, here's the thing. Billy sleeps upstairs against an outer wall. The TV room is in a relatively safe place downstairs. If a storm had hit, I would not have been able to run up, grab him, and run back down to safety.

I am no stranger to weather and I don't take these situations lightly. If that makes me THAT Mom, then so be it. I have been caught on the water in open craft during squalls. I have sailed through two tropical depressions and ridden out a hurricane on a tall ship. I've been in a house struck by lightening, and seen lightening hit an object 100 feet from me and blow it up. And I've seen a tornado in person and seen one form over my head (and I don't live in tornado prone areas). Hurricanes? Old hat. I'm pretty cautious when it comes to weather after all I've seen. Better safe than sorry.

Billy slept through it all, even the move to the lower level and then back to the crib after the front passed. So, yeah. I'm that Mom. I'm ok with that.
Posted by Crazy Creative at 11:58 PM 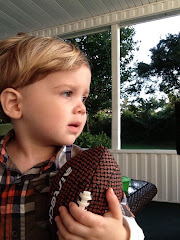